A genomic analysis of ancient human remains from KwaZulu-Natal (South Africa) revealed that southern Africa has an important role to play in writing the history of humankind. A research team from Uppsala University, Sweden, the Universities of Johannesburg and the Witwatersrand, South Africa, presents their results in the September 28th (early online) issue of Science. 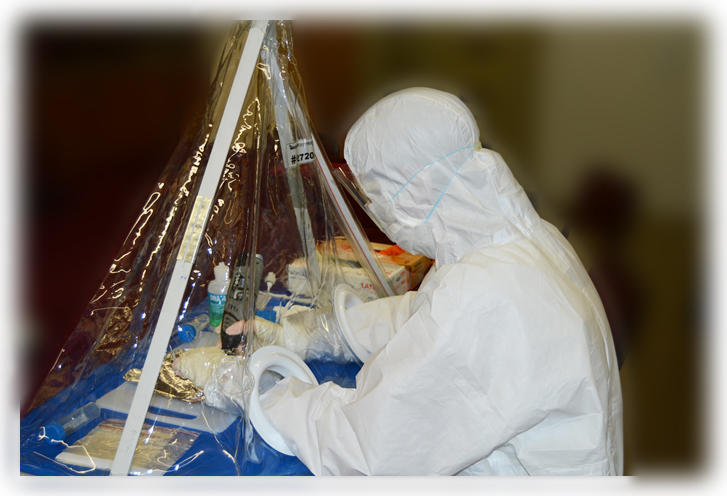 The team sequenced the genomes of seven individuals who lived in southern Africa 2300-300 years ago. The three oldest individuals dating to 2300-1800 years ago were genetically related to the descendants of the southern Khoe-San groups, and the four younger individuals who lived 500-300 years ago were genetically related to current-day South African Bantu-speaking groups. “This illustrates the population replacement that occurred in southern Africa”, says co-first author Carina Schlebusch, population geneticist at Uppsala University.

The authors estimate the divergence among modern humans to have occurred between 350,000 and 260,000 years ago, based on the ancient Stone Age hunter-gatherer genomes. The deepest split time of 350,000 years ago represents a comparison between an ancient Stone Age hunter-gatherer boy from Ballito Bay on the east coast of South Africa and the West African Mandinka. “This means that modern humans emerged earlier than previously thought”, says Mattias Jakobsson, population geneticist at Uppsala University who headed the project together with Stone Age archaeologist Marlize Lombard at the University of Johannesburg. The fossil record of east Africa, and in particular the Omo and Herto fossils have often been used to set the emergence of anatomically modern humans to about 180,000 years ago. The deeper estimate for modern human divergence at 350,000-260,000 years ago coincides with the Florisbad and Hoedjiespunt fossils, contemporaries of the small-brained Homo naledi in southern Africa. “It now seems that at least two or three Homo species occupied the southern African landscape during this time period, which also represents the early phases of the Middle Stone Age”, says Marlize Lombard. It will be interesting to see in future if we find any evidence of interaction between these groups. “We did not find any evidence of deep structure or archaic admixture among southern African Stone Age hunter-gatherers, instead, we see some evidence for deep structure in the West African population, but that affects only a small fraction of their genome and is about the same age as the deepest divergence among all humans”, says Mattias Jakobsson. 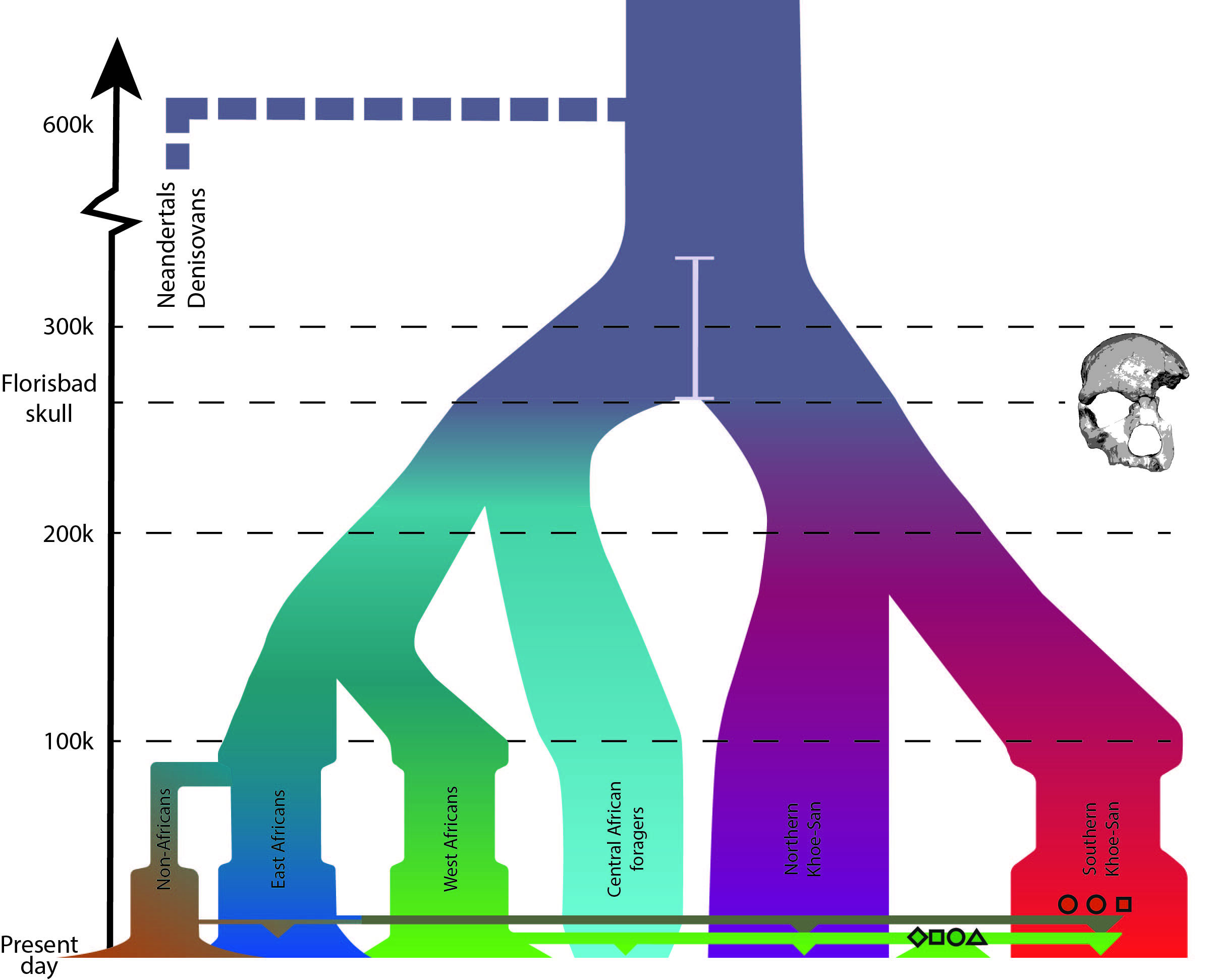 The authors also found that all current-day Khoe-San populations admixed with migrant East African pastoralists a little over a thousand years ago. “We could not detect this widespread East African admixture previously since we did not have an un-admixed San group to use as reference. Now that we have access to ancient DNA of people who lived on the landscape before the East African migration, we are able to detect the admixture percentages in all San groups. The admixture percentages in the Khoekhoe, historically identified as pastoralists , are higher than previously estimated”, says Carina Schlebusch.

Of the Iron Age individuals, three carry at least one Duffy null allele, protecting against malaria, and two have at least one sleeping-sickness-resistance variant in the APOL1 gene. The Stone Age individuals do not carry these protective alleles. “This tells us that Iron Age farmers carried these disease-resistance variants when they migrated to southern Africa”, says co-first author Helena Malmström, archaeo-geneticist at Uppsala University.

Marlize Lombard said that “archaeological deposits dating to the time of the split by 350,000-260,000 years ago, attest to South Africa being populated by tool-making hunter-gatherers at the time. Although human fossils are sparse, those of  Florisbad and Hoedjiespunt are seen as transitional to modern humans.” These fossils may therefore be ancestral to  the Ballito Bay boy and other San hunter-gatherers who lived in  southern Africa 2000 years ago.

The transition from archaic to modern humans might not have occurred in one place in Africa but in several, including southern Africa and northern Africa as recently reported. “Thus, both palaeo-anthropological and genetic evidence increasingly points to multiregional origins of anatomically modern humans in Africa, i.e. Homo sapiens did not originate in one place in Africa, but might have evolved from older forms in several places on the continent with gene flow between groups from different places”, says Carina Schlebusch.

“It is remarkable that we can now sequence entire genomes of ancient human remains from tropical areas, such as the southeast coast of South Africa”, says Helena Malmström. This is promising for our several ongoing investigations in Africa.

Cumulatively these findings shed new light on our species’ deep African history and show that there is still much more to learn about our process of becoming modern humans and that the interplay between genetics and archaeology has an increasingly important role to play. 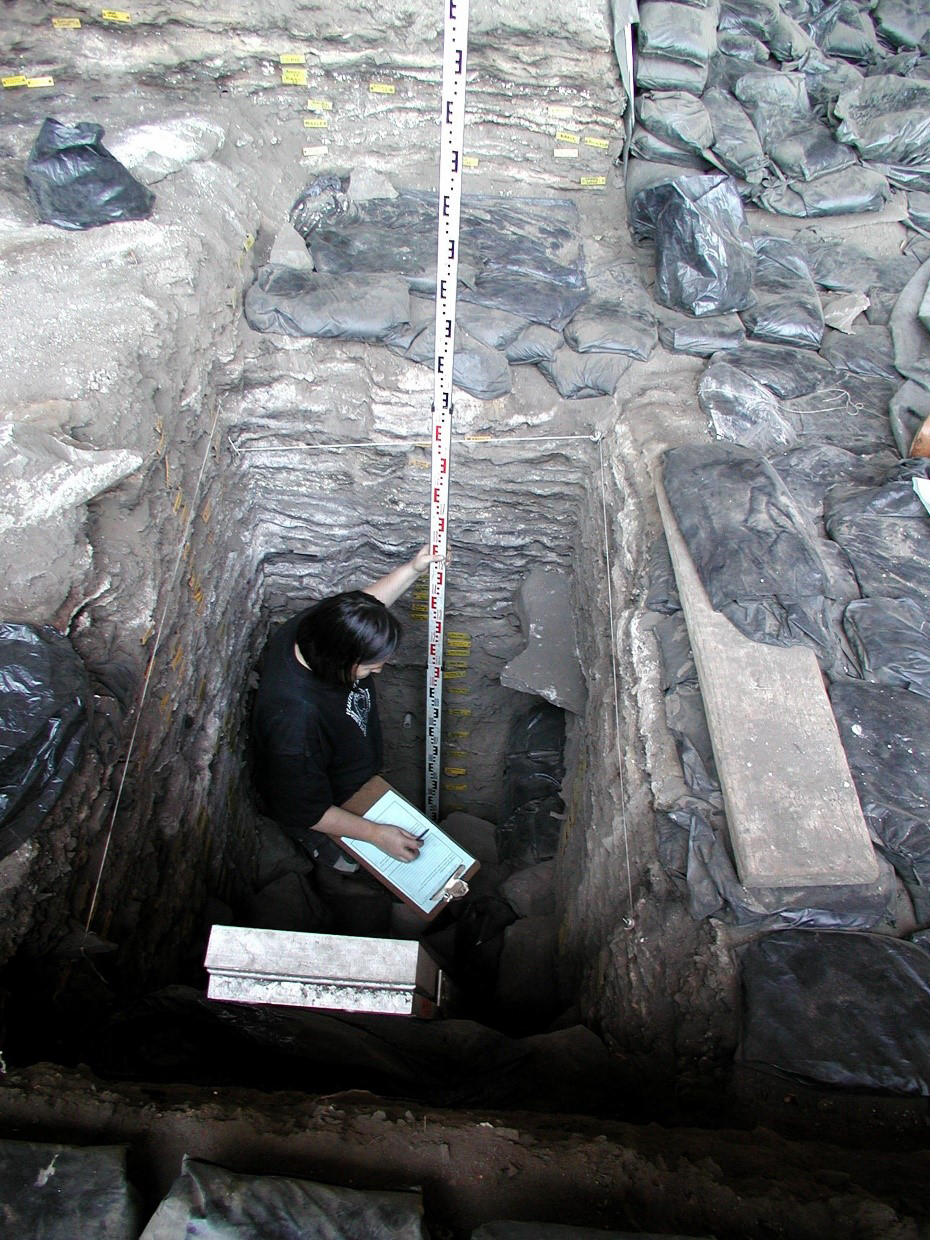 Marlize Lombard (University of Johannesburg) excavating at Sibudu Cave (under the direction of Prof Lyn Wadley, University of the Witwatersrand), just about 40 km southeast of Ballito Bay where the boy was found. The cave was intermittently occupied by humans from at least 77 000 years ago who might have been ancestral to the Ballito boy. Photograph: Lyn Wadley.